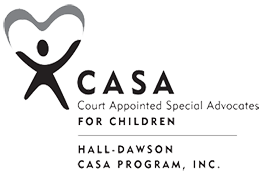 The Hall-Dawson CASA Program was formed in 1989 and was one of the first programs in Georgia.

Georgia was the 37th state to implement the CASA concept as a result of Federal and State Law.  The Child Abuse Protection and Treatment Act (CAPTA) is a federal law that requires a Guardian ad Litem (GAL) to be appointed in all cases of child abuse or neglect.  From this, the CASA concept was developed. CASA provides advocacy to children who are victims of neglect, as well as physical, sexual, and emotional abuse.

Since 1989, Hall-Dawson CASA has been advocating for children who are the victims of neglect as well as physical, sexual and emotional abuse.

We are affiliated with National CASA and our state CASA Organization, Georgia CASA. CASA is endorsed by the US Department of Justice, the National Council of Juvenile Court Judges, National Bar Association, State Bar of Georgia, and the Supreme Court of Georgia Child Placement Projects.

Consider making a Tax Deductible Contribution to our Non-Profit Organization. Donations can be made online.